The Road to Fez 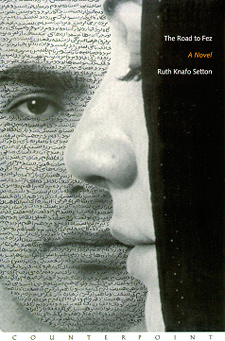 This is my first book, a true labor of love, and a coming of age novel. It has been studied in many university classrooms and written about in scholarly theses and dissertations. Interested students can contact me for further information.

The Road to Fez is an erotically charged first novel of love and self-discovery that tells the story of 18-year-old Brit Lek's return to Morocco, her birthplace.

Brit returns to Morocco planning to fulfill her mother's dying wish that she make a pilgrimage to Fez to the grave of Suleika, a 19th century Jewish martyr revered by both Arabs and Jews. But Brit gets sidetracked when she falls in love with her Uncle Gaby, her mother's passionate, restless younger brother and the town womanizer. Gaby tries to break free from the borders of his life as a Jew in Morocco by working with Arab potters and creating art that speaks a universal language. Moving easily between the Jewish Mellah and the Arab Medina, Gaby offers a window for Brit to see beyond the confines of their family's life in Morocco.

As Gaby's and Brit's forbidden love deepens, their story is interwoven with that of Suleika—the achingly beautiful 17 year-old Jewish woman who was killed because she refused to renounce her faith. Setton provides a backdrop composed of fragments of Suleika's brief, mysterious life—pieces of a puzzle that don't quite fit together. Who was Suleika? Why did she choose death over life? Did she fall in love with a handsome Arab boy, the Sultan, or her own brother?

Read "Return to Fez," an essay

"Setton plunges into a world of living history that is both richly drawn and ornately decorated...shimmering with the intensity of a character aggressively seeking her own fulfillment."
—Booklist

"Evocative and erotically charged, this first novel follows a young woman on her quest for love and self discovery... The lyrical tale captures the pungent stew of sights and smells of North Africa."
—Publishers Weekly

"This is extraordinary Sephardic literature. Tensions and contrasts are well-drawn—restraint vs. passion; old vs. new; tradition vs. secularism; Arab vs. Jews; legend vs. reality; the living vs. the dead...Ms. Setton paints intense characters facing complex inner struggles."
—Jewish Times

"What one needs in order to understand the power and complexity of love is the sort of insight and compassion demonstrated here by Ruth Knafo Setton. The Road to Fez is a novel to savor."
—Daniel Jaffe, Women in Judaism

"Ruth Knafo Setton in The Road to Fez is raising issues that...question and expand the concept of what is a Jew, what is a victim, what is an exile, what is a human being, what is reality."
—Karen Alkalay-Gut, American Book Review

"Yes, this is a very sexy book...richly drawn in Setton's often voluptuous prose...the novel achieves a dreamlike, sensual quality... The effect is dizzying, drunk, intense. The effect is all an illicit affair should be."
—The Hartford Courant

"The Road to Fez is not the kind of book in which you start asking yourself why so many books are written, or how many trees were destroyed to make that book. You feel that the book is essential to humanity and to writing, it is the kind of book you should have read before it was written, because in some mysterious way the book was there all the time. Putting the words into paper and printing it is just obvious, like dreaming or like smiling, or like breathing."
—Moshe Benarroch

"[Setton's] writing is pared-down, feral, elemental, as if after scouring identity for universal traits she has finally stripped it down to the raw universality of desire.... In the end, the novel is a cry asking for the freedom to transgress borders, to tear down the walls."
—The Journal of North African Studies

"The Road to Fez is a daring leap into a vivid brutal, seductive realm of scent, sound, and longing. It crosses boundaries, allows the imagination the intimacies and exotic distances it craves—and all the while evokes the world of Moroccan Jews and Arabs that's now been swept away."
—Rosa Shand, author of The Gravity of Sunlight

"Ruth Knafo Setton follows Paul Bowles' instinct: she lets herself free in Morocco by reaching beyond the exotic. Her quest is as liberating as it is courageous and introspective. It is delivered with crystalline passion...A testament to the powers of Sephardic literature."
—Ilan Stavans

"[Ruth Setton's] writings are reminiscent of Isaac Bashevis Sinter's or Shalom Aleichem's in telling the stories of the immigrant with one foot in the old country and a few toes in the new...Setton's skill in weaving legend, lore and life is awe-inspiring."
—Lilith

"The Road to Fez makes the Moroccan Jewish community visible through a literary portrait of the most memorable 18-year-old in recent American fiction. [A] fine novel of love and self-discovery."
—Forward

"Setton has created in The Road to Fez an absorbing coming-of-age story, tracing a hypnotic path through the spirituality and sensuality of her native Morocco."
—The Philadelphia Inquirer

"The Road to Fez is wonderful. It allows us a rare glimpse behind the veil—such an interesting, scary, intense world, filled with passion and compelling characters, the mixture of cultures, and of the real and magic—all so utterly original while familiar, the way the best tales are."
—Diane Johnson, award-winning author of Le Divorce